How Girls Talk is a documentary series following the mundane text conversations of two long distance bffs. We post this as sociological study for you, and as nostalgic reminiscent savoring for us. Nothing profound, just two girls sharing space together. 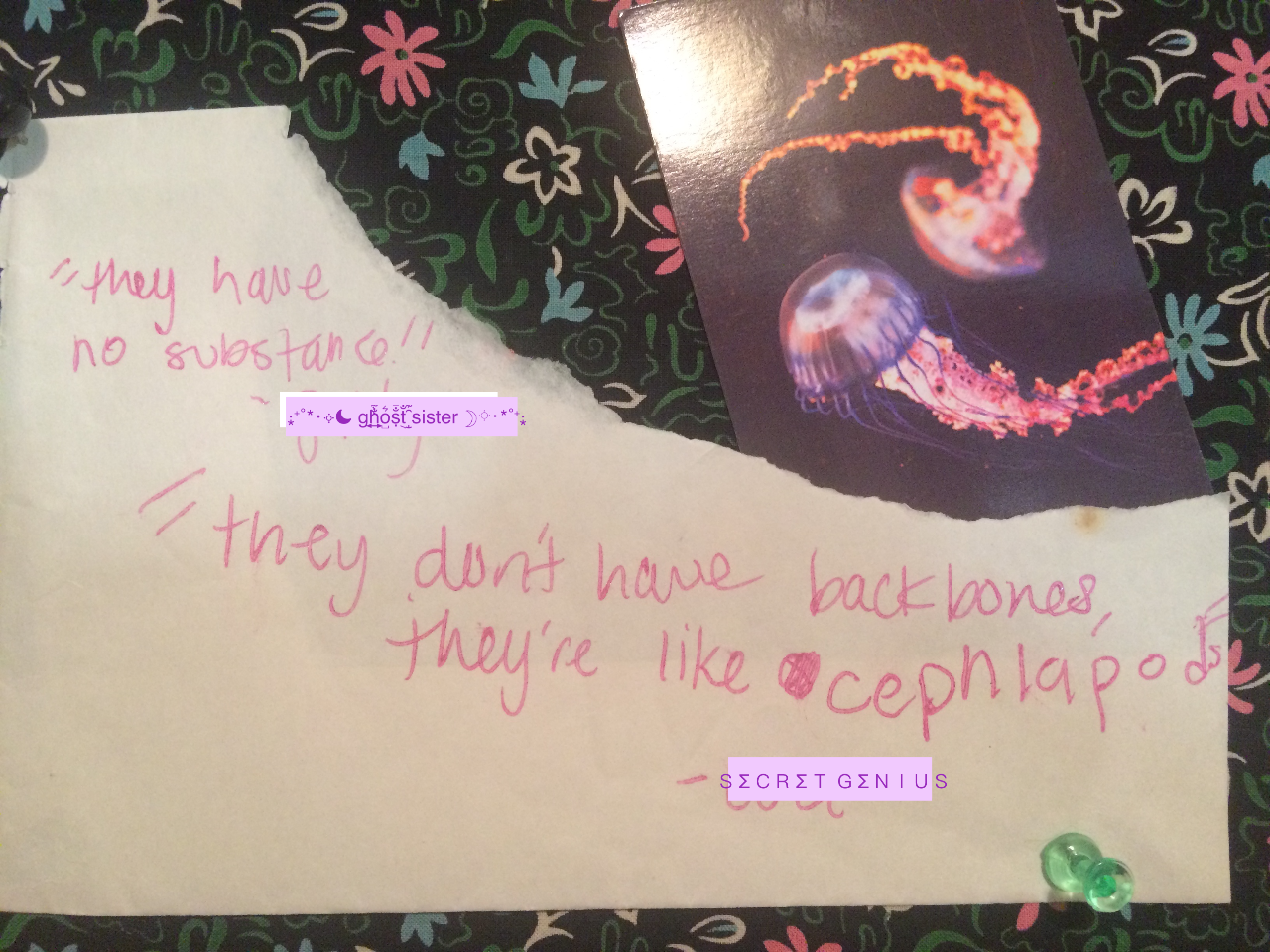 This is Ghost Sister's handwriting. She was quoting me. Paradise: Ghost Sister's handwriting looks like your handwriting Looks like my handwriting We are fucking spooky Have you realized that// Secret Genius: Yesss No and yes Slopppy Paradise: No and yes for sure But yesssss Secret Genius: Yea I actually thought I wrote it Paradise: We write the same ligatures The same written direction Letter shapes the same Secret Genius: Until I realized it came from her notebook and she was quoting me like I wouldn’t quote myself we wrote quotes all the times but quoting eachother when we thought we said funny things Yea mindmeld man: she would return clothes that belonged to her And id be like that’s yours... like we forgot whose stuff belonged to who Paradise: Thats delicious People dont understand the staying power of girls Secret Genius: Yeaaa I member I came across some statistic on that or something once it was saying how female friendships outlast all others including ones with your children or something haha I member talking to you about it Paradise: I was the one who told you about that. haha This is the clothes thing Secret Genius: Omg realllly?? Paradise: Only in ideas Secret Genius: This is so perfect Paradise: Im peeling That is so funny Literally tearing Secret Genius: I’m so glad that just happened Paradise: its a wrinkle wink in the universe When it skips a heartbeat And tells us something cute Secret Genius: https://youtu.be/lEhYJEQmExE Heheheheeeee I love you! Paradise: ✧･ﾟ: ✧･ﾟ: D I T T O :･ﾟ✧:･ﾟ✧ It’s so peaceful getting to really really know and own yourself Secret Genius: Yessss and so fascinating too Paradise: Know, own, love Secret Genius: Just interesting Paradise: Yes I agree You hit a good pocket Secret Genius: We’re such cool people man I love us What do basic chicks even talk about Paradise: Maybe they talk about this too in their own words? Secret Genius: Yeaaa totes Paradise: Haha or maybe they’re just obsessing over different shades of foundation or hair dye Either way They’re being womanly and improving upon their beauty Whether inside or out. True beauty and intelligence are one in the same. Secret Genius: Like we all mirroring. but yea... or maybe they're talking about themselves through who they talk shit about or obsess about Cause you hate and obsess about you whether youre conscious about it or not. Like so they're doing it in their own way. Paradise: Totally true I’ve been hating/ burning with envy less lately Secret Genius: Prob cause you giving yourself more space Paradise: It’s not even a “catch myself” thing. I just switched lately to admiring and saying to myself “be there soon!” Secret Genius: The more space you hold for yourself The less of that there will be You have to hold soooo much space for yourself Unconditional love and patience and space Paradise: Now imagine that x how many people in family unit Paradise: Because mothers are a family are an individual Secret Genius: Omg you’re a badass You’re right Paradise: Hahahhahahahaha thank you fuck that feels good to hear Secret Genius: Moon is almost full Paradise: Yes! And Jupiter is in line with it – more expansion time Secret Genius: I just got home from a walk it was pretty The moon Secret Genius: Ohhh jupiter is luck Paradise: Yes it was an astoundingly beautiful night here too Secret Genius: An empathic badass A spacing holding warrior Paradise: Warrior for realsies There is so much outside pressure!!! And so much internal pressure!!! I am so looking forward to the retreat so I can learn how to relieve myself of all this pressure Skillz yo Secret Genius: Yea pressure blocks flow That’s why I say you are the ultimate badasss I love you I’m always holding all of the space for you Paradise: Cuz we fam Fam from another clam 22:22 ...minus 22 seconds Secret Genius: Full moon plans? Paradise: Sleep on balcony Damn gimme some inspo Secret Genius: Oh nice! Paradise: New hammock. Vegas at night feels like a velvet blanket it’s soooo nice Secret Genius: Nice! I really like the feel of the desert Paradise: Super silky. Love it. Feels healing Even tho desolate Secret Genius: desolate is part of what I love about it Paradise: Yeah I love wide open spaces Love em There’s a huge sky here too The sunsets are ecclesiastical